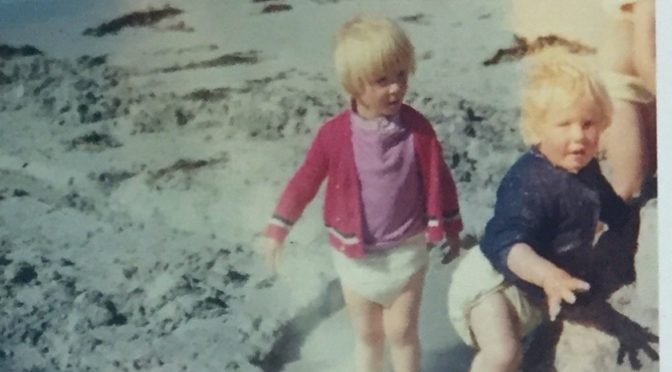 Time to share my holiday snaps before I forget I ever had one! I’ve also included a few memories from previous stays on the island.

My beloved sister-in-law, Mabel Macarthur, had invited me to spend a few days with her on the Isle of Tiree, in the Inner Hebrides, after Roddy and Arwen’s wedding.

Mabel and I set off in a taxi to Oxenholme Station, train to Glasgow Central, taxi to Buchanan Street bus station, bus to Glasgow Airport, plane to Tiree. And that’s when the photos begin, as the plane begins its descent to The Reef, (i.e. the airport) on Tiree.

Weather wasn’t great, but it was lovely to catch my first sight of the island after a couple of years. 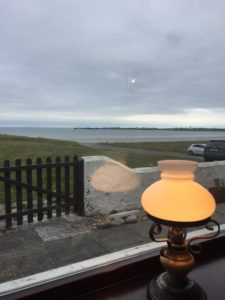 First night, Mabel treated me to dinner at the Lodge Hotel, where we sat in the window overlooking Gott Bay – memories of Iain and Roddy learning to jet-ski (circa 1985) . 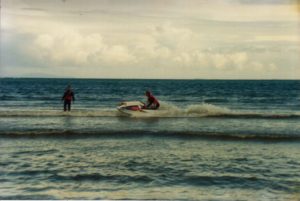 Next, getting acquainted with Jack the golden labrador. What a sweetheart. 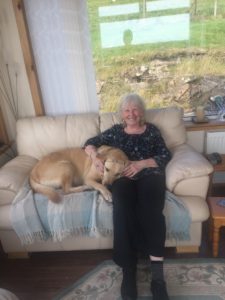 This is taken in Mabel’s conservatory. Wait till you see the view.. 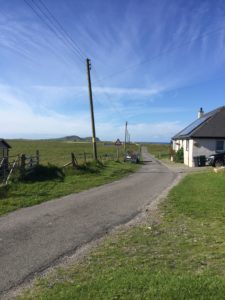 Looking past Fiona (Mabel’s daughter, my niece) and Ewan Malcolm’s house, towards Kenavara.

Tiree has three high points, Ben Hough – which Mabel’s house sits at the foot of; Kenavara, and Ben Hynish, seen below. 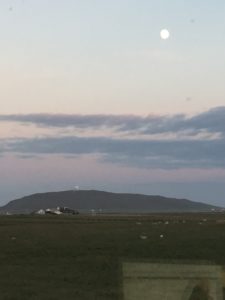 Spot the bucky ball on top.  This is part of the UK’s defence system, and the first point of reference for cross Atlantic aircraft coming over from North America. I lost a lovely earring walking up there once.

Moving round to the other side of the house, this is what sits beyond the garden. 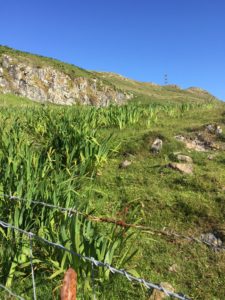 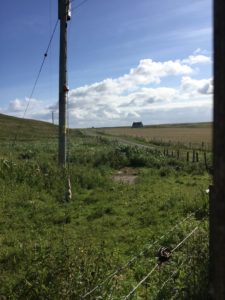 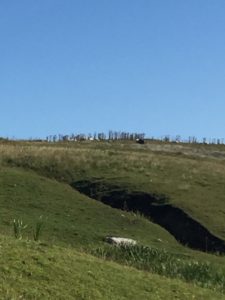 What looks like a scraggly wood at the top of the rise is actually a stand of thistles.

Next day, the weather was wonderful, so Jack and I set off to see the sea.

The route we took, 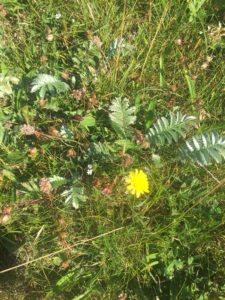 following the first available turning past Fiona’s house heading towards the coast, threatened to lead us up to the top of Ben Hough, which my tired bones weren’t in the mood for.

So what we actually saw were loads of lovely wild flowers, and a broken but heavily padlocked gate. 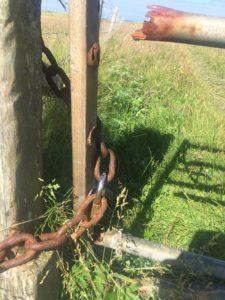 The next day, with the weather still more gloriously warm and sunny than anything I remembered from my time on Tiree back in the 1970s, when the boys were babies, Jack and I hit the road again.

Here’s a map of the island to help you orientate yourself. You’ll probably have to zoom in to follow it. Ben Hough is on the west, toward the top. Gott Bay is the large sandy beach on the east, towards the top, facing south east. Most of the bays have gorgeous fine white sand, here indicated in gold; the other, mostly smaller ones are littered with beautiful smooth pebbles of all sizes. 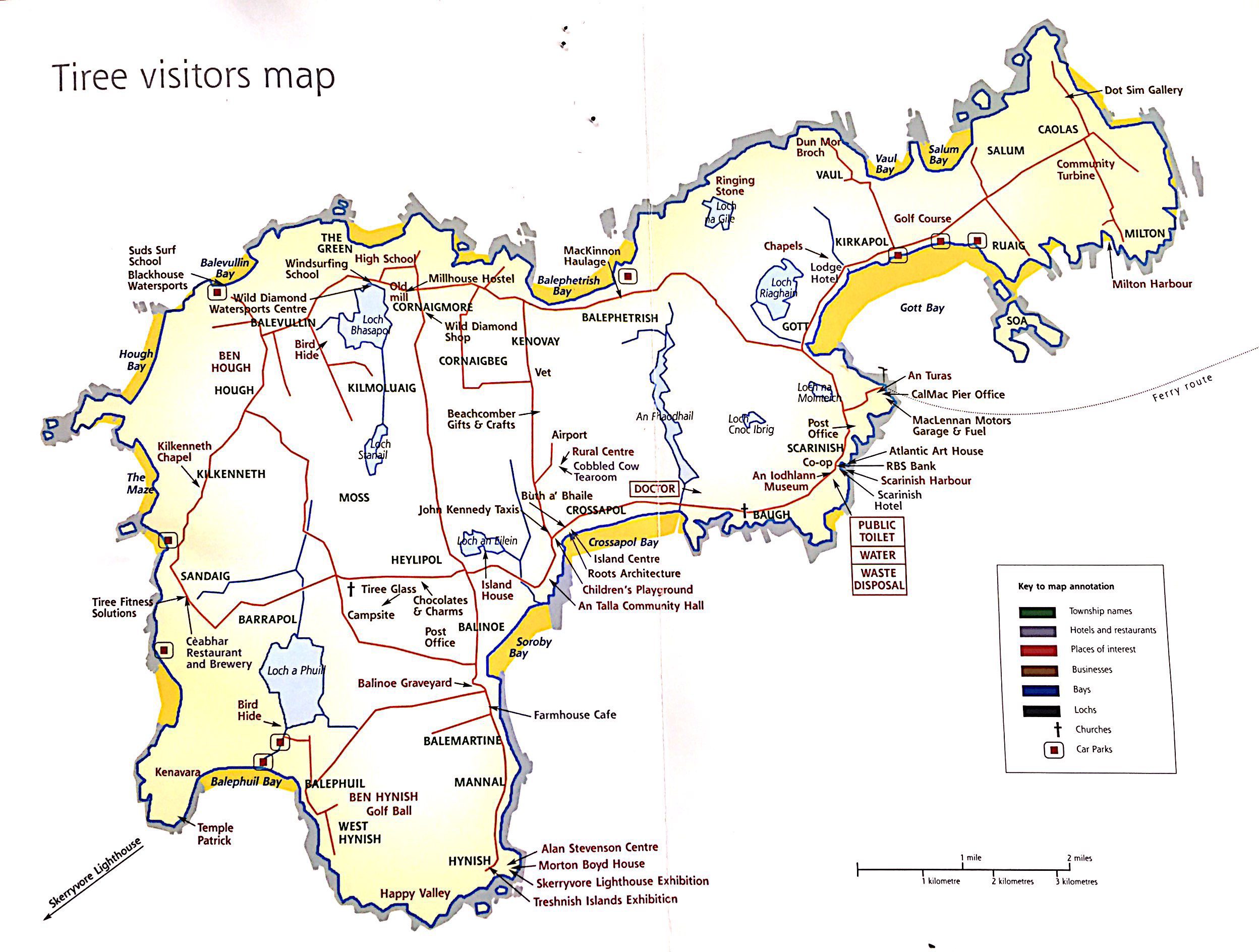 Where was I?  Oh yes, day 2, heading north from Hough with Jack, determined to see the sea. 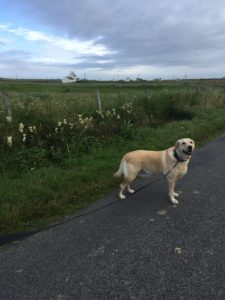 Some neighbours came down to the roadside for a chat as we wandered past.

And of course, more wildflowers. 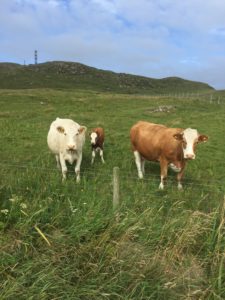 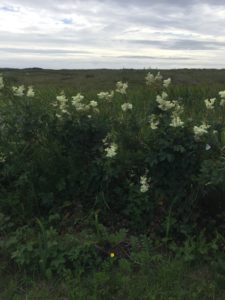 Balevullin is more densely populated than Hough, with what looks, from a distance, like actual trees. But don’t be mislead, there are no trees on Tiree, just a few sheltered, very bushy tall bushes. 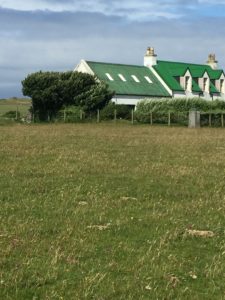 Can you believe the colour of the water there?  That’s the Atlantic Ocean, looking pretty much due north. The walk back was much faster than the walk there, expedited by a strong wind at my back. Ah, yes, I remember it well. 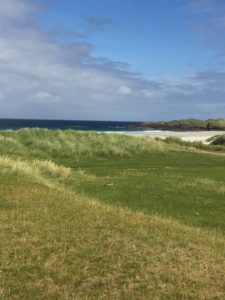 I often used to walk down to Balevullin from Cornaigmore to visit my friends Doris and Skye Mary.  Here are a few memories from those days. (You may need to click on each image to see each next one – I’m trialing a new Gallery plugin.)

Day 3: Jack and I walked south, this time to Kilkenneth, where I picked up some pebbles, just for old times sake. A couple of them made it back to Liverpool, now gracing my pot plants.

Heading to the seaside, looking due west. 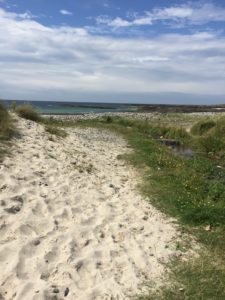 And here’s Jack, enjoying his stroll, with Ben Hough to the north in the background. 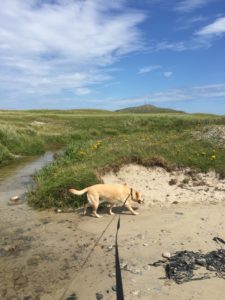 Thursday evening was the Tiree Association Annual Concert, newly re-instituted after a five year break, so I was extremely lucky. It was an absolute joy, a feast of local talented singers and musicians performing tradition music

On my last full day, we picked up my order of lobster from Fraser’s (one of Fiona’s sons) fish van, beautifully prepared by his partner Ruth, and also paid a visit to the Balinoe graveyard, overlooking Soroby Bay, where Mabel and I set some flowers for our husbands Donnie and Donneil. 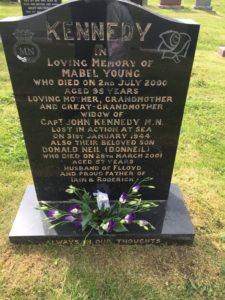 In the evening, Fiona laid on a banquest – with contributions from all of the family, and there were babies to entertain us, and much laughter. 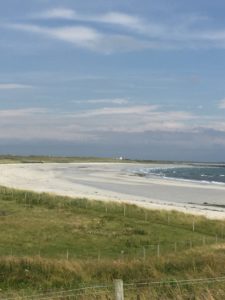 Great Aunt Flloyd and Great-grandmother Mabel with the two newest members of this side of the family. 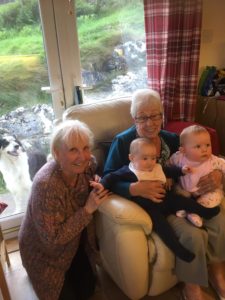 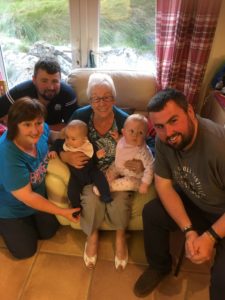 And here is Mabel with Fiona, her two sons Iain and Fraser, and their daughters Caitlin and Amy. 4 generations. Incidentally Morven, Fiona’s daughter, is expecting her first in October.

Saturday, the wind and rain arrived full force, and for a while there was a suspicion that the plane might not make it – but it did. Here is what it looked, and felt like leaving Tiree once again. 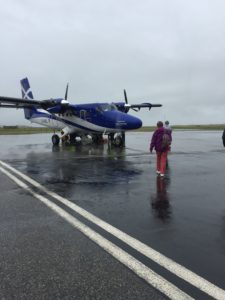 The twin-engined Otter is similar to the one I used to travel in about 150 years ago between Milne Bay to Port Moresby in Papua to and from boarding school.

I’ve created a short movie, covering the return to Liverpool, and put it up on Youtube.

And that’s all folks…