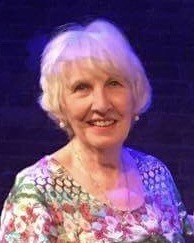 Recently, I started taking long walks again. Coming out of the slough of despond can have that effect, and vice versa. And as I walked, I began to think. As as I thought, it seemed like a good idea to share some of my thoughts.

So last week, setting off from Crewe Toll towards Princes Street, in Edinburgh, I thought I would share what was on my mind as I was walking.. Siri obligingly opened my voice memo app, and the result is here for you to listen to. There is traffic, and breathlessness involved, so it’s all very ‘in the moment’ as we say in the biz.

There’s talk about theatre, and the weather, and I do apologise for the poor quality of the recording. Clearly this is going to be a steep learning curve.

As I mention in the recording, at the top of Dean’s Bridge, a rather interesting building can be seen. I still haven’t been able to ascertain if it’s a private house or not. Here it is.

I arrived in Phoenix a week ago. The first few days were passed, as I suspected they would be, in a haze of exhausted relief.  My kind hosts took me with them to share in a family reunion on the first day, which involved lots of laughter, wine, beautiful food and a great sunset.

I am staying with friends in Gilbert, one of the outer cities that rings Phoenix. Public transport hasn’t made its way here yet. In fact, today I drove to where Google told me I would find a Light Rail Transit stop with Park and Ride facilities, only to discover that the rail hasn’t been extended this far yet.  The car park was there, and a bus stop, but quite a wait for anything else.

I have been placed in a little self-contained cottage in the back yard of the main house. It’s delightfully comfortable, and private.  A car has been placed at my disposal, and today I finally stopped wimping out and drove myself several miles to Mesa, the next city along the way to catch the light rail (what I would call a tram, but a very modern, fancy one) into downtown Phoenix. I got hopelessly lost, in spite of having Google maps printed out, AND my TomTom with local maps, but what the heck, I got there in the end.

Still haven’t seen what I would call downtown Phoenix. I appreciate it’s a lot like Houston, with its centre  a complex of businesses and offices. What I did find were 3 or 4 blocks with charming little cafes and art galleries scattered among car parks, waste ground, and blocks of apartments.  This is apparently the arty end of town, and where most of the Phoenix Fringe will happen.

Speaking of which, rehearsals are going well. My new company is shaping up beautifully, and I reckon this revised show will be a bit of a cracker – not better or worse than the last version, but different.

We had a look at our Fringe venue this afternoon, and it’s adorable. I’ll say more about that at a later date.

I mentioned in my last post that I had provided a voice-over for a colleague in Dunedin.  His name is Ian Chapman, and he is a musician, writer, lecturer and all round talented person with a spectacular Alter Ego called Dr Glam. Check out his website www.drglam.co.nz, and while there, you can click on the Music link and find the mp3 “Interstellar Overdrive” which also features  Sparkles (aka me). To my hyper-critical ear she sounds like the love-child of Kylie Minogue and Dame Edna Everage, but you can judge for yourself…